I'm bad at naming things. I'm sorry I can't make catchy titles for things *raises hands*, but I try so just go with it?

Anyway....how have you been? *awkwardly ignores three month absence* Oh me? Well, you know how it is, busy doing work and school and blah blah.....and being in a weird reading slump where I desperately read trashy contemp. novels I don't care about to try to get myself back on the wagon. Don't ask. (Well you could ask, but that's a story for another time.) Turns out graphic novels work too.

Here's one I read: 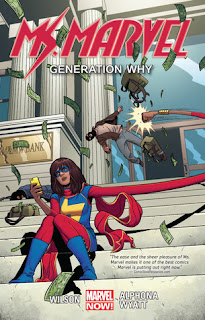 
Who is the Inventor, and what does he want with the all-new Ms. Marvel and all her friends? Maybe Wolverine can help! If Kamala can stop fan-girling out about meeting her favorite super hero, that is. Then, Kamala crosses paths with Inhumanity -- by meeting the royal dog, Lockjaw! But why is Lockjaw really with Kamala? As Ms. Marvel discovers more about her past, the Inventor continues to threaten her future. Kamala bands together with some unlikely heroes to stop the maniacal villain before he does real damage, but has she taken on more than she can handle? And how much longer can Ms. Marvel's life take over Kamala Khan's? Kamala Khan continues to prove why she's the best (and most adorable) new super hero there is!

I am clearly in the "unpopular opinion" category with this one, but I don't think this series is that great so far. I am actually considering if I should stop reading it. The problem for me is that the plot isn't anything special, and the dilemma I have is that I LOVE the fact that the main character is Muslim. I feel like that shows that the industry is finally starting to show more diversity and represent more of its audience, but that isn't enough for me to love the series. I want to, but I don't.

The Inventor as a villain is weird and uninteresting. He's a fucking bird. I don't care about his motives or why he isn't in a classic crazy-laughter straitjacket, even though he should be. Like seriously though, where does he even come up with his crap?

Her peers are ridiculous. I don't know what kind of backwards city she lives in, but I have a hard time believing anyone is that easily tricked or that anyone that age could be convinced by what the inventor said. Really, it's not even-like I can't understand-why?! He uses them as Human Batteries and they're volunteering for it? They must be really stoned all the time if they're believing whatever half assed explanation he's giving.

The Wolverine bit was really fun and informative, but I think he was written pretty OOC for this. He was too...nice and tame(?)

Posted by renascale at 9:13 PM