Muahaha I'm finally able to share this cover, but I actually saw it for the first time when I met Elise three weeks ago! She is so awesome and even more talented in person you guys. I know, is that even possible?! It is.

*tearing up* She drew LAREL FOR ME.

And now....the cover for Water's Wrath: 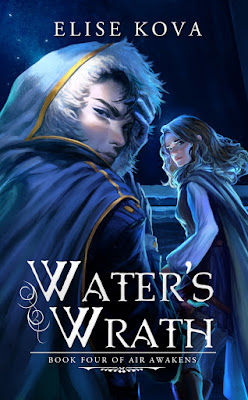 Elise has also given us a giveaway!

Elise Kova has always had a passion for storytelling. She wrote her first novella, a high-fantasy, in sixth grade. Over the years she’s honed her love of literature with everything from fantasy to romance, science fiction to mystery, and whatever else catches her eye.
Elise lives in Saint Petersburg, Florida, where she’s currently working on the next installment in her debut YA fantasy series: Air Awakens. She enjoys video games, anime, table-top role playing games, and many other forms of “geekdom.” She loves talking with fans on Twitter (@EliseKova) and Facebook.